The handful of checkboxes isn’t enough. The broad umbrella terms that attempt to categorize entire cultures don’t cut it anymore—if they ever did.

By lumping diverse ethnicities and cultures into monoliths, organizations do a disservice to their employees, their leadership development efforts, and their own bottom lines.

Companies should consider disaggregating their employees’ self-reported data, says Angela Ju, a DE&I business partner at Dropbox. By accounting for the complexities among different communities, organizations can refocus and customize efforts that support and help advance underrepresented groups.

Furthermore, it’s crucial to map specific skills and competencies when promoting or hiring for leadership roles. Otherwise it’s easy for unconscious bias to creep in. Promoting someone based on their “executive presence” is vague and can disadvantage Asian American candidates, who are harmed by stereotypes that they are more soft spoken or demure, cautions Ju.

In the following Q&A, Ju contextualizes the rise and pitfalls of the myth that Asian Americans are a monolith and shares practices for organizations to improve equitable development and better understand the diversity within their Asian American community.

What does this moment in time mean to you as an Asian American, and how can history help us process recent events?

Recent events, particularly the attacks on Asian elders as well as the murders of Asian American women that we saw in Atlanta, have been acutely painful. This series of more recent and more prevalent hate crimes stem from a longer history of Asian exclusion and discrimination.

For me, seeing the current response to this has been frustrating on multiple levels. In talking to some of my colleagues and friends, there's also a loss for words because Asian Americans don't have all the history, terminology, and context to be able to understand and ultimately verbalize their reactions to these events.

When we think about how U.S. history is taught, for instance, Asian Americans, have maybe one page or one paragraph in the overall story of how the transcontinental railroad was built. But the Chinese Exclusion Act of 1882 was actually one of the first laws implemented to prevent all members of a specific ethnic group from immigrating to the U.S. It stemmed from Americans not wanting Chinese immigrants to continue coming over after helping build a railroad, or competing for resources after the gold rush.

From there, we continue to see a history of exclusion and fear that Chinese immigrants or Asian immigrants in general are taking jobs and resources away from Americans, which is not too different from the more recent narrative around Hispanic and Latinx immigrants.

But there are a couple of layers in relation to what's happening within the Asian American community. There's the very initial visceral response to the events, and then I think there's the discovery of what it means to be Asian American and really understanding our history at a personal level as well.

Right now, the culture and the community as a whole is trying to understand our history, individually and collectively, and also our place and position relative to other marginalized communities. So for the community and culture as a whole, now is a really important moment to come together and understand what it looks like to work in solidarity with other groups.

I will not say ‘all,’ because I don't want to reinforce in any way that the community is monolithic, but there is a reticence amongst most Asian families (and I’ve experienced this personally) to discuss struggles and hardship. I think that comes from Asian parents who immigrated to the United States and made a lot of sacrifices focused on creating wealth and success for future generations.

In turn, when we talk about history we lack the context of the broader Asian American community in the United States. And we also lack our own personal, family histories, because our parents don't always talk about those things.

So in some ways that lack of dialogue, historically, even at a personal and family level, has reinforced frustrations of not having the terminology to talk about adversity, not knowing exactly how to bring it up, and also the frustration and some guilt people my age might feel about not knowing the history of racism and discrimination our parents faced when they immigrated to the States.

In terms of how this is showing up in the current day, we are grappling with our place and position as a marginalized community. When we think about Asian Americans overall in the U.S., I do believe most people think we are the ‘model minority.’ There is the perception and the stereotype that Asian Americans tend to be super focused on education, super successful in business, and are generally well off economically, but that has very problematic roots and is a myth that, for better or for worse, some Asian Americans themselves subscribe to. The danger of subscribing to that philosophy is that it creates divides and tensions with other marginalized communities. When we saw the news of Asian elders being attacked and it looked like some of the attackers were Black or African American, I think that immediately brought up tensions between the Asian and the Black community that are reinforced and exacerbated through things like the model minority myth .

In your observation, what is the tech industry’s relationship with the AAPI community?

The tech industry has a very interesting relationship with the Asian American community, for multiple reasons. The most important is that, in tech, we often focus on diversity in terms of gender, and when we talk about race and ethnicity, we're really talking about underrepresented groups relative to the broader U.S. population. So when we define ‘underrepresented’ in that way, in tech Asian Americans are actually overrepresented. And a lot of the DE&I efforts, rightly so, focus on increasing access to opportunities to work in tech for Black and African Americans, Hispanic, Latinx, and Native American people.

What that often creates, however, is somewhat of an excuse for the tech industry to not have to try to understand the diversity within the Asian American community. In general, when we have this mindset of potentially limited resources for different groups and or limited time and effort to be able to spend on supporting different groups, Asian Americans can be seen as an afterthought, because, well, they're already well represented, right? So they should theoretically be doing fine.

But research shows that Asians are actually the least likely to be promoted into management positions. While they may be overrepresented in tech overall, it begs the question: If we're not seeing those individuals represented in leadership at the same rates as more entry-level or even mid-level positions, do Asian Americans have equal opportunities to succeed in tech?

One of the most important aspects for organizations to consider is how they define the traits, characteristics, and skills of successful leaders.

One of the most prevalent stereotypes that can prevent Asian American employees from being promoted into leadership or management is that they just lack things like ‘executive presence,’ or they are perceived to lack the relevant or requisite leadership skills. Part of those stereotypes stem from how Asian Americans have been portrayed in the media and movies, for decades and decades. It feeds into a stereotype, but I don't think we always make the connection when we are evaluating employees for leadership potential.

One of my favorite studies that I used to talk about in unconscious bias training is this concept of evaluating and rewarding confidence versus actual competence: researchers have found that people who project high confidence tend to attain the highest social status, regardless of whether they actually have the competence to back that up. In the context of evaluating Asian American employees or candidates who may be stereotyped to be more quiet or submissive or have a general reticence around aggressive self-advocacy, that preference for confidence over actual competence may create a bias against them and ultimately prevent their ability to advance.

Regardless, it’s a worthwhile question for organizations to consider what makes leaders successful because different employees will respond to different leadership styles in different ways. Having diversity and leadership in how different people carry themselves, how they communicate, and what skills they bring to the table—that's going to lead to success.

What are practical recommendations for organizations that want to invest in the Asian American community through this crisis and beyond?

Step number one, which we are considering at Dropbox, is beginning to disaggregate AAPI data. Right now, we collect information on our employees for race and ethnicity similar to many other companies: it's all self-reported, but we use the federally mandated [Equal Employment Opportunity Commission] categories.

When we think about the term ‘Asian American,’ it's actually a very recent term coined in the late 1960s by grad students at UC Berkeley who wanted to mobilize Asian students across ethnicities, in light of the broader civil rights and anti war movements. While I think the origins and purpose of creating that umbrella term were great, it masks the diversity within the overall Asian American community. Within that ‘Asian’ umbrella, you have Chinese Americans like myself, Korean Americans, Japanese Americans, Indian Americans, Cambodian Americans, Laotians, Vietnamese people, Thai people. It's an incredibly rich range, as well as diverse array of individual ethnicities and cultures.

So, when I talk about disaggregating Asian data, what we're really saying is that we need to give people the opportunity to self-report in a way that's more nuanced and more specific to their individual ethnicity.

That very first step is critically important because, when you begin to unpack the data, I'd venture to guess that some individuals from the Southeast Asian community have experiences more similar to the other groups that are traditionally underrepresented in tech. For instance, while more than 50% of all Asian Americans (PDF) may have a bachelor's degree or higher, for Cambodian Americans that number is actually less than 20%. You see similar differences and trends in poverty, for instance, when you start to break out data from just a monolithic broad Asian American term, to more specific groups. 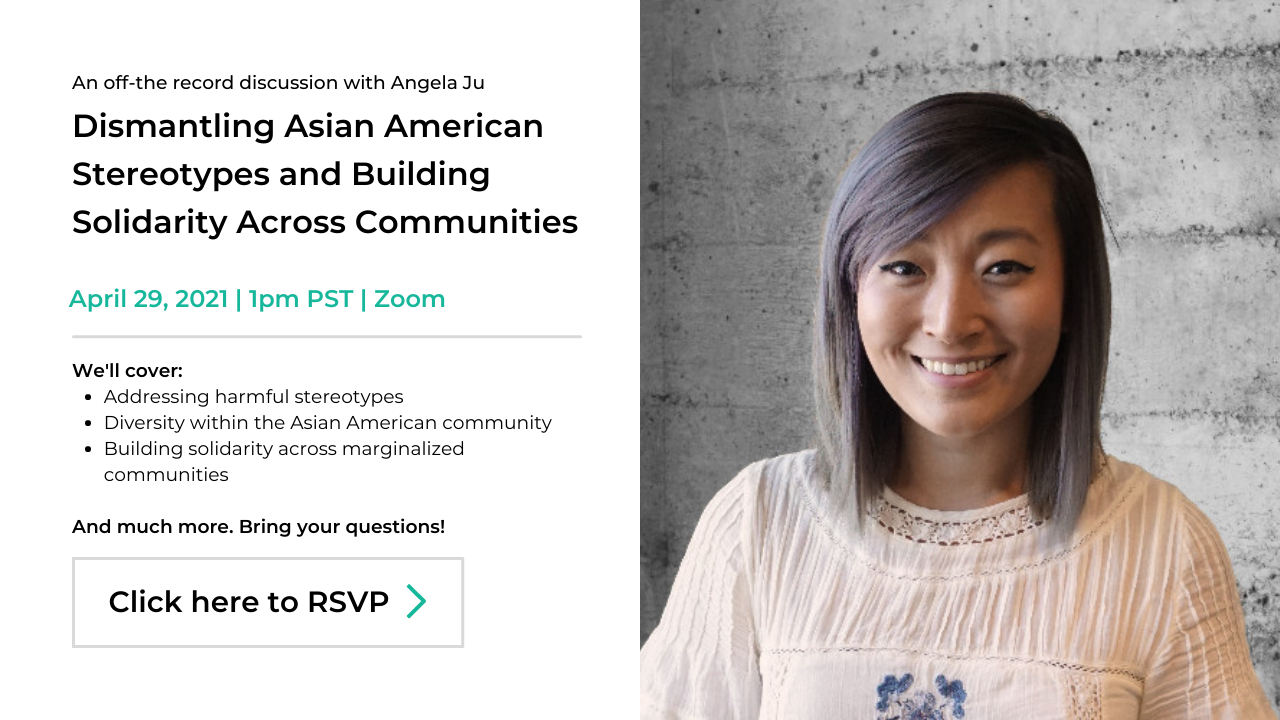 Tags: DE&I Conversations
Back to Blog

Career Development: What Startups Can Learn From Corporations

Davina Mazaroli worked on a team of 200,000 people. There were offices in every major city across...
Read More

Why Strategic Thinking Is a Critical Skill for Promising Leaders

A good company recognizes there is work to be done to retain and promote a diverse workforce. A...
Read More