How to Build Out Executive Leadership

Your colleagues at a startup or early-stage company can feel like family. You’re all pouring heart, soul, and loads of time into a venture you utterly believe in, doing whatever it takes to make it succeed. You’re wearing hats you never dreamed of -- everything from product to payroll. The atmosphere is scrappy, personal, and full of momentum. It works.

Until it doesn’t. There comes a time when even (and maybe especially) the most promising companies need to usher in the experts, an executive team that can impart vision, hire well, and lead strongly.

The good news is if it’s time to hire experienced leaders, that’s usually a sign business is thriving. The tough part is hiring execs can be a huge risk -- to the company’s bottom line and its culture at large.

So, we brought in an expert. Adele Rom has led people and talent teams across JPMorgan, Riot Games, Reformation, Clique Brands, and TechStyle fashion group, where she led the talent center of excellence and the team responsible for hiring close to 500 people in one year. She recently founded ARC, a boutique management consulting firm out of Los Angeles that focuses on talent, culture and development.

Rom has seen what happens when companies make a bad executive hire: money and resources down the drain and untold costs to company culture. But she’s lived through enough hypergrowth to know when it’s time to build up leadership, what to look for in candidates, and how to recruit. Some of it is a science; a lot of it is gut.

The following interview has been condensed and edited for clarity.

What are the telltale signs at a company that it's time to hire executive leaders?

It varies in different companies. Generally, I think there are some themes.

One is the energy of the organization. When the organization goes from high momentum, positive energy, and passion, to everyone feeling collectively overwhelmed and chaotic, that’s usually a sign.

Secondly, when your founder is in the heart of everything and you start to have business decisions, practices, and processes bottlenecking because all decisions are funneling through the founder, that's not sustainable. Usually, that is another sign you need functional leaders.

And finally, performance starts to slip. You may have a strategic plan and roadmap, but then all of a sudden features or products aren't getting out the door on time, you’re missing major milestones, and you just don't have the functional expertise in place in key areas of the business. That's where executives come in, because they're driving and moving things forward from a performance perspective.

What are the biggest risks to keep in mind when hiring executives, and how can you try to mitigate those risks in the search process?

One is obvious: the financial risk. You put a lot of money into the hiring process, not just in the compensation of the executives, but in the process to get there. You're hiring search firms and you're doing extra work, so when it doesn't work out, those are sunk costs.

The second risk is cultural.

Any time you have a person in a leadership role, they're in a unique position because they're not only a part of the culture, they’re in a situation where they have the power to shape and change a culture.

So when you look at really good leaders that have a great impact on a company culture, they come in and they not only fit well within the culture but they also enhance it. They transform it into something great. The flip side of this is if you hire the wrong leader for your company, although they might be a good person, a good leader, they might be a detriment to the culture you're trying to shape and create if they aren’t the right fit. If their position is one with enough influence, they can steer the culture off course.

Finally, sometimes we think leaders are going to come in and solve world peace and correct all the problems in our organization overnight. You might have other challenges that are related to structure or a flaw in the business plan. One leader might not be able to fix all that.

What are some key lessons you would impart upon yourself 10 years ago, or what would you advise the head of people at a given company about starting diverse executive searches?

I can think of at least three senior-level executives I knew were the wrong fit, but I didn't say it with enough courage and conviction, and in the end we hired them and we paid a pretty painful price.

In the long run, we had to replace them. It was very expensive and a risk to the culture. Looking back on it, I wish I would have been more courageous.

The other piece is don’t fall prey to referrals. If a VC or a board member gives you a resume of someone they believe might be a good fit, look at your network as an amazing resource, but with a critical eye. Trust that nobody's going to intentionally refer you someone that isn’t a good fit, but know that you still need to do the same level of due diligence with a referral that you would with a non-referral.

How long should companies expect executive hiring to take? Walk me through the timeline.

It depends if you're using an agency or not. Any time you’re using an executive search firm, there's standard contract goals. They're seasoned pros. They know how long it takes. They have a giant database. They have a big network of people. They can go from launch to a first round of viable candidates within a few weeks. I would say there's no reason you shouldn't have a position filled within three months.

Whereas if you're trying to do searches in house or through your informal network, and you think you're going to fill an executive role in a month, you might find yourself very frustrated. I’ve even seen searches take up to a year and they are very painful for everyone involved. When that happens, it’s often highly correlated to the fit with the founder or CEO. It goes back to the vibe and the connection with that individual.

For executive searches, if you have the money, should you work with a recruiting firm?

I have a fairly strong opinion on this, though there are many talent acquisition leaders that might disagree with me, if you have the money and you're early-stage trying to get your leadership in place, use an agency. The pros far outweigh the cons. You choke on the cost a little because this is one of the more expensive things you can do, but if they land you a great executive, the ROI is going to more than pay for itself. Compare that to the amount of opportunity cost to losing the time that goes with it.

The other piece is they can white-glove the experience. A lot of times early-stage companies are just not sophisticated enough. If the candidate has a bad experience, you're not going to land them anyway. The agency is going to treat these candidates the right way; they're going to represent your company, which is good for your brand.

Once the company gets to a certain size, say you’re 500 employees and still high growth, aiming for 1,000, think about building out internal executive search capabilities. Because at that point, the ROI makes a lot more sense to bring it in house. You’ll know the culture and save thousands of dollars in agency fees.

Have you ever had to replace the CEO in any of the roles that you've been in, and if so, how was that different from a traditional executive search?

I have not had to replace a CEO, but I have had to exit a president. And I've had to hire new executives when the founders have changed their position focus with almost all of the companies I've worked with. At some point, one or both of the founders want to start a different type of role. And so we weren’t necessarily backfilling a CEO but we were creating the right C-suite so that one of the founders could change focus and it wasn't going to completely disrupt the business.

If you don't have any potential successors for your CEO or founder, the process is really painful, very lengthy, and very disruptive to the entire employee base and the product itself. At Clique Media, the company I was at just prior to starting my consulting firm, the woman who had been our CFO has since been promoted to president of the company. She was groomed and she stepped in, a great success story.

Many of the best leaders are in your talent pipeline; your pipeline is internal if you invest in and develop it. 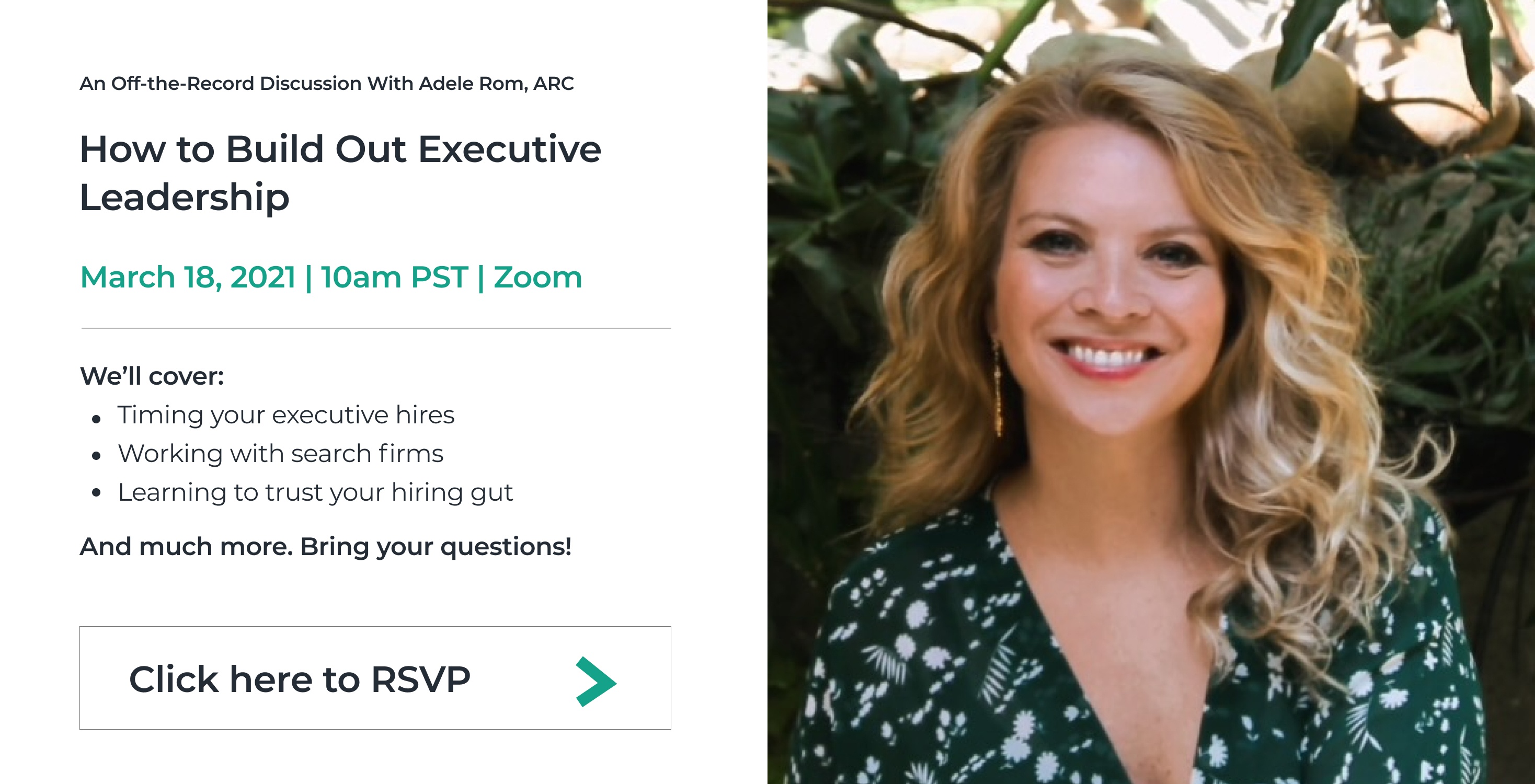 Tags: Startup to Scaleup
Back to Blog

Career Development: What Startups Can Learn From Corporations

Davina Mazaroli worked on a team of 200,000 people. There were offices in every major city across...
Read More

How to Build a People Function That Scales With the Company

Leslie Kurkjian Crowe didn’t set out for a career in people leadership. At Dropbox in 2014, she...
Read More

A company will not achieve equitable representation based solely on what it perceives with the...
Read More