A good company recognizes there is work to be done to retain and promote a diverse workforce. A great company actually digs into the data and has the tough conversations that lead to better allyship.

At first glance, Asian Americans appear overrepresented in tech. But studies show they’re the least likely of any race to be promoted into management.

Lulu Cheng coaches many underrepresented leaders in tech, drawing on her decade of experience building and launching products at Pinterest and Dropbox. She also facilitates group programs on identity, solidarity, and equity.

“Part of me was really saddened that what's kicking off this national attention on Asian Americans has been these recent hate crimes,” says Cheng. “At the same time, I'm really glad we're starting to have this conversation, and I hope it will spark some curiosity to learn more about our history.”

In this Q&A with Cheng, learn about Asian American history, the origin of the model minority myth and how it impedes workplace advancement, and what companies can do to be better allies for the AAPI community.

Would you share some background on the history of the Asian American community in the United States?

Historically in the U.S., conversations about race tend to be pretty binary. It’s typically framed in terms of Black versus white, or Black and Brown versus white. And Asians have looked at that and felt like, well, where do we fit in?

The truth is that we occupy a unique position in the racial hierarchy in the U.S., where we both experience racism and we also perpetuate it in some cases. Given the spike in hate crimes against Asian Americans this past year and the fact that Asian Americans make up a significant portion of the workforce at a lot of tech companies, this conversation is trying to shine a light on the challenges and barriers that we face as a community.

A lot of people don't realize that some of America's first exclusionary immigration laws were actually directed against Asian Americans. The Chinese Exclusion Act of 1882 was the first and only piece of U.S. federal legislation to explicitly suspend immigration for a specific nationality. This was in response to the wave of Chinese immigrants who were coming over to help build the transcontinental railroad.

So this notion of Asian Americans as foreign, as a perpetual outsider—that has long roots in our nation's history.

Please explain the origins of the ‘model minority’ stereotype and why it’s actually a problematic myth.

The model minority myth, which is probably one of the most pervasive myths about Asian Americans, also has its roots in history. The term was first coined in 1966 by a white sociologist named William Petersen, who was trying to draw a contrast between what he perceived as the success of Japanese Americans in the U.S. relative to Black Americans. After it was coined, the term was picked up and used to drive a wedge between different minority groups, to pit them against each other, and you see echoes of that today.

The reason this is a myth is because it obscures the historical origins of why Asian Americans are perceived to be really successful. It actually goes back to the Immigration and Nationality Act of 1965, passed by Lyndon B. Johnson, which sought to attract skilled workers and educated immigrants from around the world, especially Asia.

At the time, the U.S. was engaged in a Cold War with the Soviet Union, and they viewed this strategy as a means of gaining competitive advantage: “Hey, America is really great. Come here if you're educated. We have a bunch of skilled jobs for you.” Many of the Asians who came to the U.S. were East Asians and South Asians. They were educated because that was exactly what the law was selecting for.

Another common perception is that all Asians are the same, when in fact there’s a huge diversity of people that fall under the AAPI umbrella. How are these stereotypes harmful?

The AAPI label covers people who come from countries representing over 50% of the world's population. That's a huge swath. People who emigrate from Southeast Asia versus the Pacific Islands versus South Asia are each going to have very different backgrounds.

The model minority myth makes it seem like all Asians have achieved the American dream. But if you look at the wave of immigrants who came to the U.S. from Asia after the Vietnam War or after the Korean War, many of them were refugees. They emigrated in very different circumstances than someone with a college degree who knew there was going to be a skilled job waiting for them when they got to the U.S.

So one way stereotypes like the model minority myth are harmful is by ignoring the experience and the needs of a large proportion of Asian Americans. They also make discrimination against Asian Americans invisible, when we know it’s a very real problem. The spike in hate crimes against our community since the pandemic started just underscores the prejudice that’s been there all along. And in the workplace, the way this invisibility manifests is by contributing to the perception that Asian Americans don’t need professional support or resources.

What can companies do to address the bamboo ceiling?

I just want to caveat that the term recently has become controversial, because people hear it and wonder if it has racist undertones. As far as I can tell, the genesis of the term actually wasn't created with those intentions.

The term borrows from the glass ceiling, where there is an invisible obstacle to advancement. It refers to the barriers that exclude Asian Americans from management and executive positions on the basis of subjective factors like “lack of leadership potential,” that cannot be explained by job performance or qualifications. You see this when you look at the data—in many organizations Asians might be well-represented at the entry level or the individual contributor level, but not at the manager or executive leadership level. There we are drastically underrepresented. We are the least likely of any race to be promoted into management. Asian American men are the most likely of any demographic to feel stalled in their careers. So it’s not surprising that they’re also more likely to quit their current jobs and look for growth elsewhere.

There is so much nuance and so many different experiences within the AAPI community. How can organizations recognize that diversity and historical context to show up as allies today?

A foundational step is to understand what’s actually happening in your organization in terms of the numbers. Break down your promotion data and your retention data by race. It’s not enough to look at what percentage of people at my company are Asian. As a tech company, you're likely overrepresented relative to the percentage of Asians in the overall U.S. population. Break it down by level—entry level versus manager versus executive. You're probably going to see a steep drop-off.

Next, there's some reflection and interrogation to do, especially for managers and anyone responsible for career development in your company. In Western cultures we associate certain qualities with having “leadership potential,” for example being confident, outgoing, assertive. Often there’s a gap between these qualities and stereotypes that we hold about  Asian people as being quiet, passive, timid. Some of these biases operate on a subconscious level going back to the history of Asians being viewed as perpetual outsiders, perpetual foreigners. In fact, studies show that people unconsciously perceive Asian faces as less expressive, less engaged, and untrustworthy.

I would ask managers and executives to examine their assumptions about what makes someone a good leader and how that might be helping or hurting certain people on their team. I would encourage them to ground constructive feedback in specific examples and actionable steps to improve instead of broad statements like “lack of leadership potential.” I hope we can start asking questions like what’s the best way to mentor and work with people who come from a different cultural background? How can we expand our definition of leadership to be more inclusive? 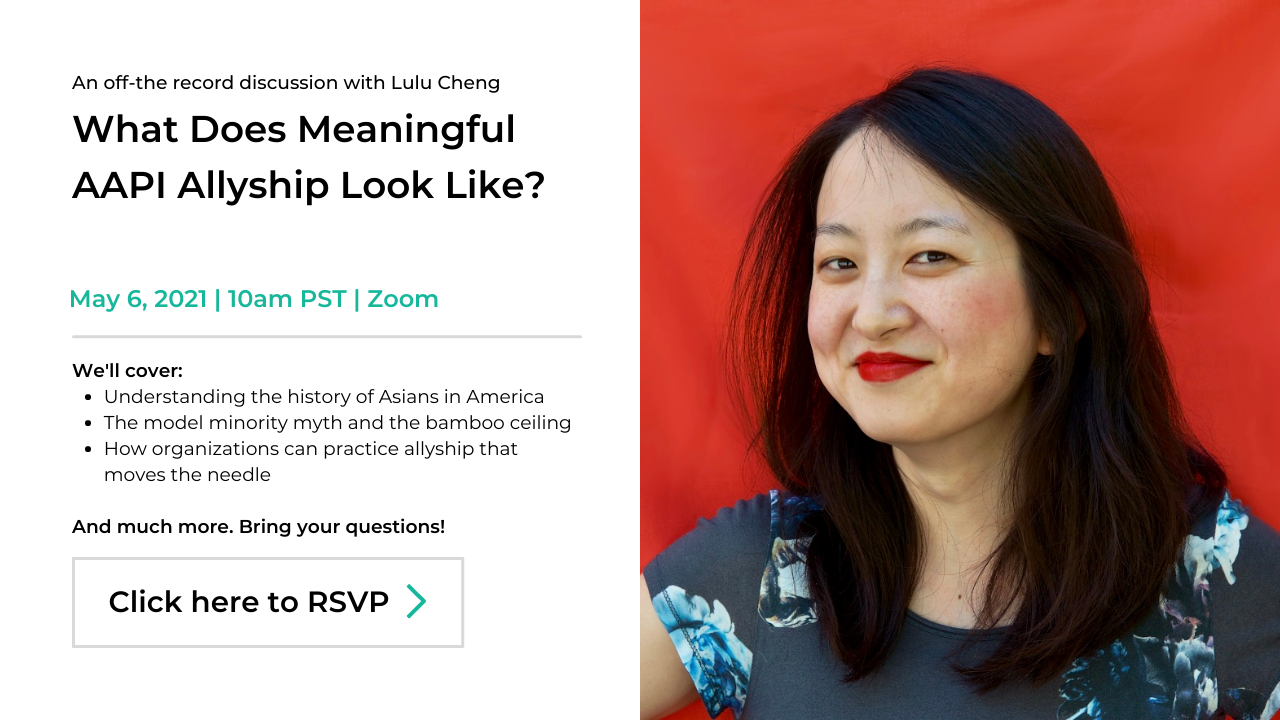 Tags: DE&I Conversations
Back to Blog

How to Build Out Executive Leadership

Your colleagues at a startup or early-stage company can feel like family. You’re all pouring heart,...
Read More

A company will not achieve equitable representation based solely on what it perceives with the...
Read More